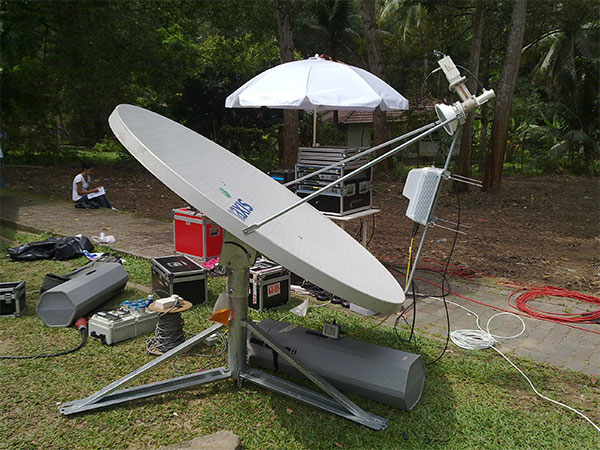 Binasat Communications Berhad (“BinaComms”) state of the art digital satellite services for its clients on a closed-circuit basis. The services are self-sufficient, relying on BinaComms’s own equipment and personnel, utilising C-band space segments on MEASAT-3. All equipment in the network known as DIGISAT, conforms to the Digital Video Broadcasting (DVB) standards as published by the European Telecommunications Standards Institute (ETSI).

The DVB standards used are designed with a maximum amount of commonality and are based on the ubiquitous MPEG-2 coding system. The MPEG-2 stream itself may be transmitted encrypted or in the clear, but the norm would be encrypted to ensure that the programs carried on a closed-circuit basis are not received by unauthorised viewers.

Digitization, compression and encoding of the TV signal to a MPEG-2 signal reduces the transponder bandwidth requirements without reduction in picture quality. The normal analogue requirement of a full 36MHz transponder or half transponder is reduced to 4.5MHz transponder and thus saves space segment costs. The antenna size becomes more manageable, even when operating in the C-band and this makes it possible to take advantage of a C-band signal’s relative immunity to rain attenuation.

The receive only earth stations include the following major equipment subsystems: